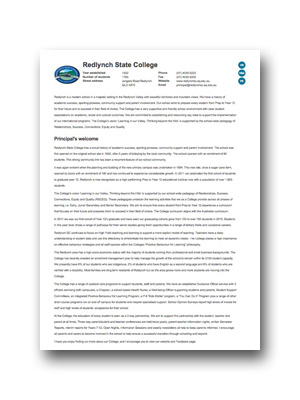 Redlynch State College is a modern P – 12 college situated in a picturesque and safe suburban setting offering the very best learning environment for all our students. The college has a proud history of academic success, sporting prowess, community support and parent involvement.

Redlynch State College was first opened on the original school site in 1932. The new primary campus, on the current site, was opened in 1994 with an enrolment of 180 and has continued to experience considerable growth. Community support saw the push for a secondary campus and in 2007 our ‘7 – 12 campus’ opened its doors to year seven and eight. In 2011 we celebrated the first cohort of students to graduate in Year 12.